Next, I’m presenting a never played character, so there isn’t any ambientation, all the background(this one is brief I promise 🙂 ) is easily insertable in any campaign. It is based on D&D 3.5 and the Warlock class, which I love and can’t wait to play. 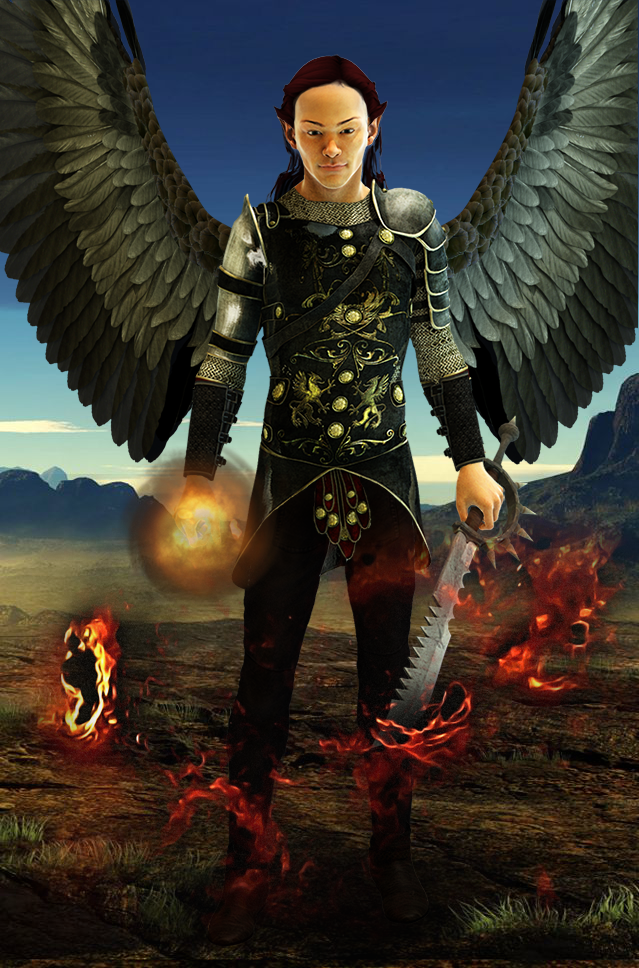 Warlock, Male Elf
Name: ‘Ken’ Ahzid Kendov [roughly translates in “The Bitter Warrior”]
Full name: Kendov Zohungaar Zahrahmiik Qahnaar Paal, Aar Unslaad Daanik Vulom [roughly translates in “the Warrior Heroically Sacrificed to Vanquish the Foes, Servant Eternally Doomed in Darkness”]
Story:
The war between the elven village of Gisir Arivae [roughly translates to “keepers/guardians of the sunlight”] and the Orc tribe Toor’ah [“Infernal Hunters”] was ravaging since centuries. The numbers of the elves were dwindling constantly while the fertility of the orcs allowed them to replenish the front lines with unfathomable speed. If that was not enough, the orcs were beginning to experiment with the Dark Arts, allowing them to evoke ranks of devastating demons that made the already declining number of elven Clerics steep down even more.
The other elven villages were not interested: that war was their and their alone.

The situation was so terrible that the remaining Village elders sat together for the one last time – their numbers were awful and many warriors were too young or outright infants [20-60 years old] while the veterans and experts could be counted on a open palm. So Dark was the situation that Darkness found its way in the elven light: nothing more was to lose, a desperate and blasphemous plan took form. 48 young elves were recruited and volounteered for The Deed: fight darkness with darkness.

Those younglings’ innocence was to be sacrificed to the Nine Hells, and the act had to be volountary. That is how the first and the last elven warlock army was born. 33 young elves survived the Rite, and only 13 survived to the end of the war 10 brief years later.

Those survivors were Marked* as heroes, but they were tainted. Episodes of psychosis, uncontrolled violence, depression put them aloof from their own community, that started sublty isolating them – even the Elders responsible for The Deed were deep inside regretful of their own decision, labeling it as a desperate measure for desperate time and they wanted nothing more than to forget about all of those dark times…

…140 years have passed since the end of the War…

*The Marks are a rare way used by the elves to communicate. Since elven villages are sparse and without regular contacts, people as heroes, commanders or dangerous criminals bear marks visible only to the elves that recounts their own story.

Particular signs
– Each night Ken has vivid nightmares, and often wakes up invoking a Eldritch Blast.
– He sleeps the bare minimum but sometimes it is literally impossible to wake, his eyes roll back in their sockets and his skin becomes pale – almost white.
– In the place where he sleeps often appear marks of Evil, as burned pentacles where he laid.
– Sometimes seeing (not LOOKING) him with the corner of the eyes he appears as a demon.
– Most animals tend to attack him or run in fear.

Character
He is totally Chaotic Neutral, his elven ancestry helps him to not fall to Evil but really, killing or passing through doesn’t really matter. All he wants to do is to discover some way to free himself from the clutches of the Hells, partly for revenge and partly to not become an instrument of Evil. What he does not know is that The Hells are a living and planning entity and not all of his actions are really helping to further its cause. His constant nightmares cause him to be aloof and not sociable; he prefers solving his problem blasting his way out.