If you want to create your own packages for others to use you can sign up to our Developer Program and download the necessary tools for it. You can freely play around with it, try out different ideas and see how they look in the program. However if you are considering developing a pack to actually share with the community, we would advice to get in touch with us first so we can make sure that the pack you would like to work on is in line with our plans, and of course with other content creators too.

There are several different type of packs you can create:

We strongly advise to read through this page, as we covered lots of useful details on how to create and test your custom package in the software, however this video will also give you a basic understanding on how you can see your creations in ePic Character Generator, so it’d might be a good idea to start by watching it.

How to get started?

Once you’ve downloaded the Developer Pack, unpack it in the directory you’ve installed the generator. We generally recommend not to use any system directories, like Program Files, as you’ll most likely face some permission issues, meaning you’ll need Administrator rights to save or edit files in those directories. If you have a secondary drive like drive d:\ it’d be better to install the software and the developer pack there, alternatively you can use the Users directory in c:\Users\your_user_name\ to install the software, as in this location you can save and edit files freely. After unpacking, you should see the following structure: 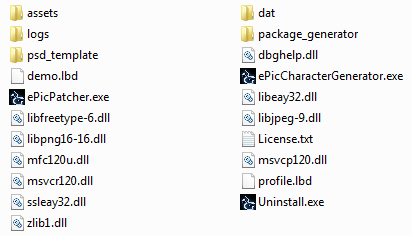 How to create the Demo pack?

How to create new categories?

If you decide to create a standalone character instead of an expansion pack, you’ll might come up with several item types which don’t fit into any of the existing categories available in the software. To overcome this, you can use the ePicConfigEditor.exe located in the package_generator folder. 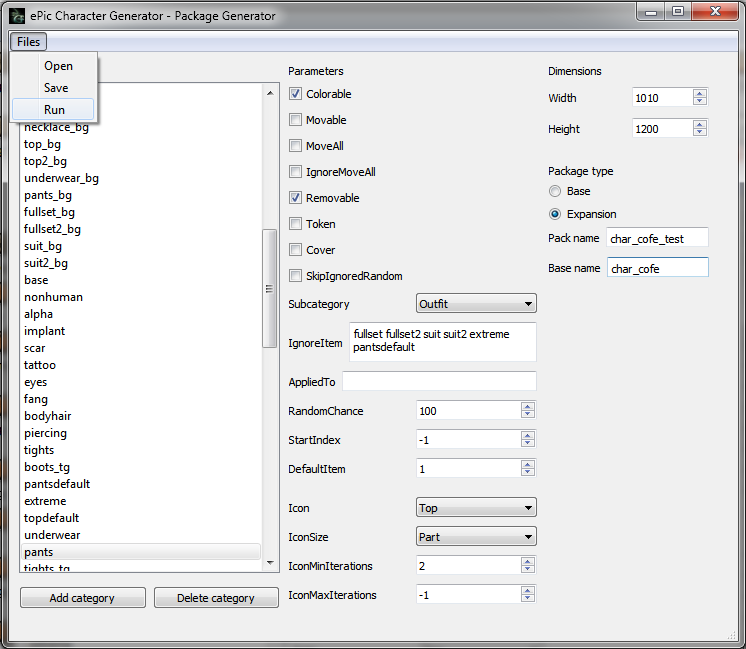 Once started, you’ll first want to open an existing config file. Hit Files/Open, and select the cfg_template_base.txt. After loading, you can examine the order of the current categories, as well as all the properties that can be fine-tuned in the program. Please keep in mind that the order the categories are listed is the same as in what they’ll be rendered inside the software, starting from top being rendered first, while the last will be the one on the top. If you want to place items behind the character make sure to add the category above the “base”, and if you want items to be in front of the character, then below it. The order of the categories can be changed by drag&dropping selected categories to new positions. You can delete existing ones and create new ones by pressing the buttons below the list.

Keep in mind that if you want to create multi-layered categories, you’ll need to manually create the _bg part of the category, and add it to the selected position in the category order. Same goes for the items which can be Toggled, you’ll need to specify the location the item should be toggled to by creating the _tg category and place it in the correct position. It doesn’t matter what parameters you’ll add to the _bg or _tg parts, as they inherit everything from the main category, except for the Subcategory, which should be set to Hidden.

Now if you take a look at the parameters some of them will be self explanatory (like Colorable or Movable), while others might need some explanation:

– MoveAll means that if you move the selected category, all other categories will be moved as well. Currently only the “base” category has this enabled, so you can move the character around and all the items on it will be moved with it.

– IgnoreMoveAll is doing the opposite. When you are moving a category around which’d move everything else around, the items which ignore this will be left in place. This is usually enabled on items or effects which don’t have a connection with the character, so they don’t need to be moved.
– Removable means there’ll be a default crossed circle icon, which can be selected and then no item will be displayed in this category. There are a few categories which we always want to have items in, like the base, ears, eyes, or underwear, so in these cases disabling Removable will make the crossed circle icon disappear.
– Token is for token and card frames, where a cover should be applied to hide most of the image, and only a small part should be left visible.
– Cover is used when a token or card frame is active to hide the image. By default this is just a fully white image.
– SkipIgnoredRandom will make more sense once you learn what ignored means. This flag enables the category to keep an active item in it when a Random is being rolled, and not to roll on other items which would have the opportunity to hide the category. You should enable this on any categories which have circular ignore lists.

– Subcategory defines in what main category (the ones in the middle panel) this subcategory should be visible in. If you choose Hidden, it means that this category will not have a button in the menu, and can only be made visible by using other methods. All _bg and _tg categories should be in the Hidden main category.
– IgnoreItem is a list spearated by spaces of other categories which should be hidden when this category is active. For example you can create three categories for weapons, Left_Hand, Right_Hand and Both_Hands. You want Left_Hand and Right_Hand to ignore Both_Hands, and Both_Hands to ignore Left_Hand and Right_Hand. What this means is the user can freely select items in both Left and Right Hands independently of each other, but when an item is selected in Both_Hands category, then the Left and Right Hands will be set back to default, so they won’t conflict with the item placed in both Hands.
– AppliedTo is only used in the Alpha category, you can specify here which categories the alpha should be applied on.
– RandomChance specifies that when the Random button is pressed, what percentage this item should be randomized. 0 means never, while 100 means always.
– StartIndex is only used when we don’t want to make an item Removable, but instead have a 0. item. This is used in “base” and “background” for example, where you’ll both need to put a 0.png or 0.jpg in the pictures/base or backgrounds folder. This is somehow the older alternative of Removable, you can use whichever looks better for you.
– DefaultItem can be used to set an item which should be used when the package is loaded. For example you can set a default Hair to the character, so when the pack is loaded the character won’t start being bald.

– Icon is used to set how the icon should be generated by the config generator. Top will start to create the image while keeping the Top in focus, while Center and Bottom will focus on other parts. You usually want to create icons for hairs from the top, for eyes in the center, and boots from the bottom.
– IconSize specifies what part of the item should be visible on the icon. Part means only part of the item will be visible, while Full sets that the item should be zoomed out to be put on the icon in full.
– IconMinIterations and IconMaxIterations are only used when IconSize is set to Full. This defines how many times zooming is allowed to find the perfect view of the item.

– Dimensions can be used to specify new width and height for the pack, but please keep in mind that 1010×1200 is what is being used by all Season #2 packages currently, and the UI is built for this aspect. If you want to use different dimensions, please let us know before starting production of the package.

Now if you configured your new categories, set the order of the layers and fine tuned all the parameters you’ll want to Save your config file so you can reuse it later. We’d advise to use a different name instead of overwriting cfg_template_base.txt, so you can always check how we set up our characters if you need to. Once everything is ready you can either use the ePicPackageGenerator.exe by running the .bat file and adding the -template your_custom_template.txt as an argument, or you can run this from the Config Editor too. At Package Type you can select if you want to generated a Base Package, or an Expansion one. If you need it to be a base, type the package name in the box (char_cofe_test for the demo), and if you are creating an Expansion, you’ll also need to enter the name of the existing base character (char_cofe for exmaple). Once you press Files/Run, the package will be generated by using the newly created config file. If any errors occur or if the generation finishes successfully, you’ll be notified in the messagebox. When the generation finishes you can test the newly created pack in the software. For the new categories you’ll see that their icons are a bit different; this is beacuse we create all category icons by hand as it looks better compared to how it’d when the software creates them. All these icons will be used as placeholders during the creation of the pack, and once you are finished and submitted the pack to us, we’ll make sure to create all the necessary category icons so they’ll look just as the others do.

What to do with a finished pack?

When you’ve finished working on a package simply compress the whole package directory to a single zip or rar file and use the Submission Form below to send it to us. After your submission we’ll review the pack, create the necessary assets and convert it to our package file. We’ll get back to you with the details of when it will be released and to confirm other details, like the price, the distribution method and the options for revenue share.