I’d like to introduce you folks to my next character, a charming young elf called Falathiel [“Huntress”]. She’s a cleric of Sehanine Moonbow but cursed since birth to be a magial conduit to the Abyss – the source of the Demons. Thus she also has the abilities of a warlock, albeit she serves no master other than her goddess, which isn’t the source of her powers. 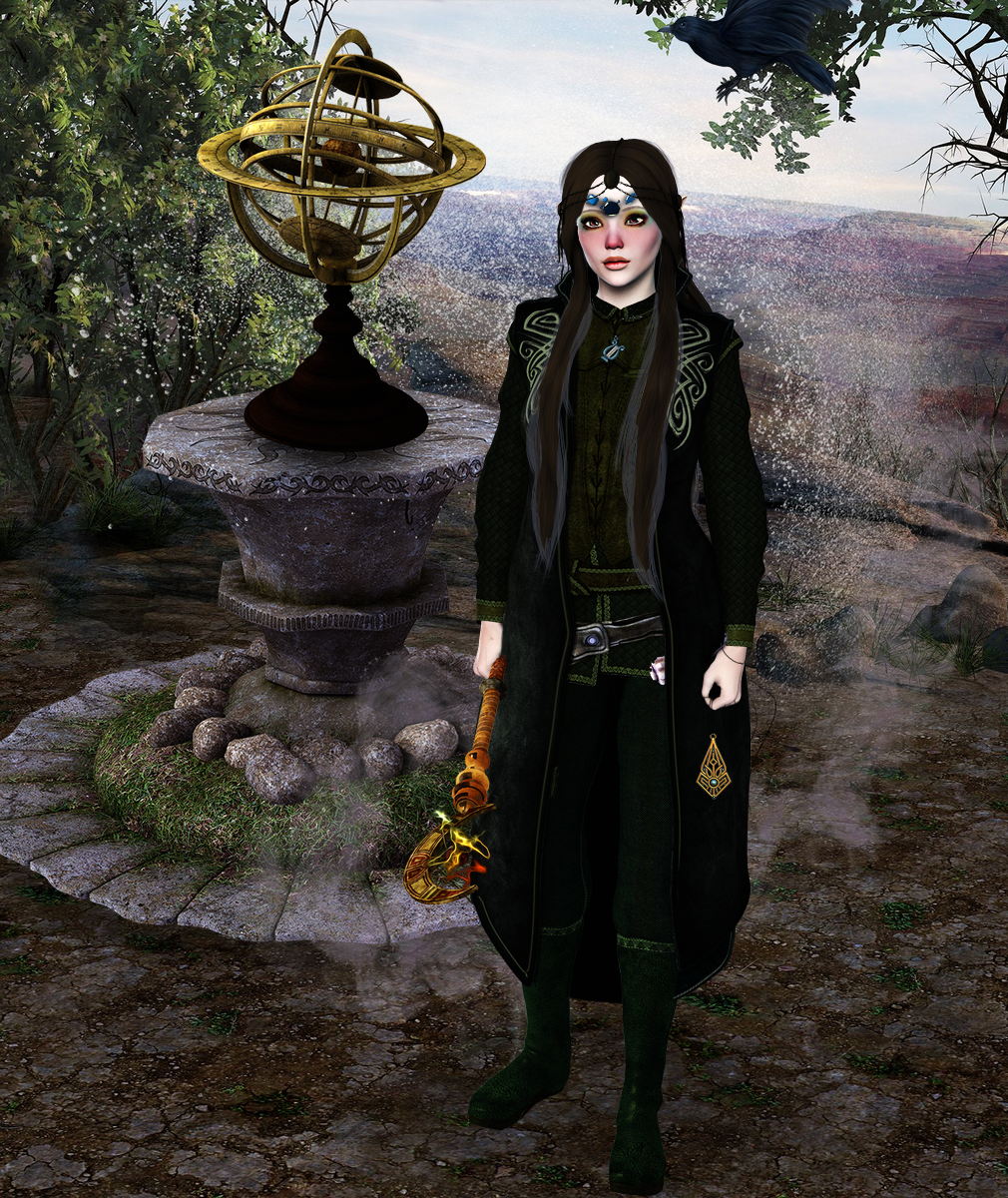 This time I did my research, or more correctly I adhered to what elves usually are. First and foremost elves tend to dress in shades of green and so I chose the colours. Most moon elves have dark hair (also I wanted to confront myself with a brunette, since I over-use redheads). Lastly, she may be half a cursed warlock with a strong temper and a worthy training in weapons, but she’s also and mostly a cleric so she wouldn’t be too heavily cladded. Elves tend to dress lightly and comfortably so I had to fight my tendence – the same of many other artistically challenged people – to add too many things.

The background is always a problem because I find that the choices are too limited. In this case I tried to depict a wilderness shrine, something that would fit a elven clerical order.

I used the “effect” to project droplets of light near the shrine, to create an ambient full of light and holiness… contrasted by the unnerving violet aura and the fliyng raven (bad omen) upon her head.

I usually stich to simple haircuts – adventurers learn quickly to be pragmatists – but I wanted to defy my own clichè stating expressingly that she’s a cleric, it MUST be clear that she’s no fighter… nevertheless stay out of the receiving side of her offensive magic. I also chose to having her not wielding any obvious weapon: a staff with a symbol of the Moon (would have fit better if it was a full moon) and a sacred symbol.

The background is still in the making, for now there is a draft which I’d have to translate from Italian before posting it here. For now she’s the result of the strangest combination of events and divine intervention… But I’m thinking to explore also the “born again fallen cleric” path. I think it’s worth a shot.

I.) ORIGINS
[from the divinations archive of the Great Seldarine Temple]
“… The Seldarine found themeselves involved in the second battle ever fought in the Holy plane of Arvandor. Lloth Lady of Chaos, traitor of the Seldar, queen of the 66° pit of the Abyss, cause of the first war in Arvandor and of the fall of many elves, patron of the drows; allied with Grrumsh One-Eye, eternal nemesis of Corellon Larethian The Protector; perforating the ancient barrier that separated the Godly Realms from the Abyss, violating the sacred law of Ao the One conducted under the false promise of ascension to divine status and eternal power hordes of fiends in Arvandor.

With valor the Seldarine fought: Corellon Larethian in a deadly bladelock against Gruumsh his nemesis; Eilistraee the Night Dancer resolutely against the superior Lloth; Sehanine the Lady of the Moon guiding the Celestial armies opposing the Horde; lastly Angarradh Queen of Arvandor assisting in battle each of the combatants.

The fiends demise now inevitable, the two Dark Gods fled and left the Horde with no more escape routes to its destiny. Then it was when Fate, superior to the gods themselves, struck suddenly and mightily with the sacrest and rarest of the events: the ethereal silvery thread of the Astral travel appeared in mid air right in front of the Lady of the Moon, carrying the soul of a newborn elf down to the Material plane.

A new escape route improvisely available the Fiends, ever the cunning opportunists, way before the Seldarine realized what was happening, grasped their only chance to avoid annihilations jumping on the silver thread; inside the soul of the newborn they could take control and open a gate from the Material Plane to the Abyss…

Instinctively and with the mightieth courage Sehanine Moonbow detached a tiny fragment of her essence and uncanningly threw it upon the waning thread, thus securing a piece of Herself inside the soul of the new life that would guide her and help prevent the opening of the Abyssal Gate. The new life Fate would have an unthinkable importance…”

II.) FALATHIEL
Every single elven cleric in Toril felt the turmoil of the battle of the Gods. Three seasons after the War in The Sky, in the city of Ar Adoe, the miracle of life took place with the rare event of a birth – elves are graced with long lifespans at the expense of their fertility. Short was the time for the celebrations though, for a foul flaming pentacle appeared under the place of the birh claiming the life of the child parents, before they could even name the girl.

The temple emptied at once and each priest, cleric and sage rushed to the place of the unholy mahyem. Soon enough it became evident that the child was cursed, and the only possible course of action was the darkest one: the child had to be destroyed, for failing to do so would bring disaster to the already weakened elven people.

Just about when the cleric delegation was, with anguish and sorrow plaguing their hearts, to terminate the child a Moon ray appeared in the full daylight over the infant and all those who were present had the same dream-like vision: the girl would be named Falathiel and would be raised as a Cleric at the Temple; when she was grown up enough to decide for herself she would be free to choose her path for her fate was hers alone to follow.

The fiendish powers dwelling within her required constant concentration to be suppressed – each time her mind slipped terrible effects took place, like flaming hellish symbols appearing under her feet, impossibily hot flames appearing around her destroying her surroundings. It was of absolutely paramount importance to keep strong the connection between the good goddess Sehanine and Falathiel in order to help her resisting the influence of the Abyss over her soul when she was unconscious, all the meanwhile she had to learn how to exert a continuous self-control to bridle and suppress her demoniac powers.

For this reasons her childhood was characterized by extrem rigorousness; she was subjected to cleric training well before she could read or write and to harsh trainings similar to those practiced by warrior monks, in order to learn to keep control and lucidity even under extremely taxing or stressful situation. Unlike the norm for the elves she grew up mostly isolated from the rest of the community, in part out of concern for the collateral damage she could wreak if only she lost control for a single moment, and partly out of a slight envy because due to her direct connection to the Goddess, the power she held as a receptacle for the Abyss and the extremely precocious training she was a cleric more powerful than many city elders, let alone the common elves.

Nevertheless Falathiel grew up good, despite the tragedy surrounding her birth she was treated lovingly at the Temple. In time she learnt to refexively keep enough self-control to not be a danger for herself and those around her. Despite all this she hadn’t an easy youth: almost every night she was haunted by horrible and extremely vivid nightmares, often culminating in bursts of baleful magical energy or the appearance of demonic signs. This condition and her childhood spent in a much narrower environment than what’s sound for an elf weighted heavily on the young elf maiden, who grew up progressively less talktative, more distant and with a tendency to pessimism and sadness, yet animated by strength and empathy deriving straight from the Moon Lady.

Yet in time it became clear that her life was not meant to be spent entirely in the safety of the temple and that the temple itself would not be able to protect her from the Evil trying to pry in her eternally – nor to prevent the Evil dwelling inside her from spilling outside. She was born during a battle, she felt that much, and so she was meant to die (at least that was what she believed), turning against the Abyss everything it had given to her.

So Falathiel prepared to leave the city of Ar Adoe, training purposefully as a warrior cleric and, secretly as it wouldn’t be well received by the Elders of the temple, learning how to harness her inherent fiendish powers and to temper them with the Goddess intervention, untile the day she definetely bid her farewell to Ar Adoe, claimed her parents heirlooms and couragiously walked towards her destiny. Long after that, our story begins…