So honestly this wasn’t SUPPOSED to be this long…

Alrighty.. so I think this next entry needs a bit of background. Like Antheia this is a character made for my story fiction, not my boardgame (though it’s basically the same background…).

Without going into too much detail -mainly because I haven’t finished writing it- some Bad Things™ end up happening between Antheia and Marcelllus. I alluded to some of it when I posted Antheia. Lets just say the resulting conflicts between his love for Antheia, Penelope, loyalty to an old friend didn’t end well. Marcellus, having spent so much time in the south in general and with Penelope specifically did not realize just how deep and powerful was the Kharunian hatred for mages. And it ended up costing him. A lot.

So fast forward a while…

He ends up leaving Ardanya and travelling across the ocean east to Kembria. Kembria, where Valwyrian elves, Kharunians, and Ardanians are rarely seen. In Kembria Marcellus started a school teaching his own form of the Kharunian sword arts (his own form because the three forms used by the Tali’Centi take years to master and were not well suited to the type of swordplay used in Kembria). While he intended his form to be a martial combat art, it actually ends up a new favored art of the social elite (partially due to it’s origins in the “fabled Kharunian sword art”, which was known even in Kambria), earning Marcallus quite a reputation. Within 12 months he’s making a comfortable living with one-on-one teaching of nobles, aristocrats, and other elites, and within 18 months prospective students have to be on a waiting list.

So enter Aeron De’Rourke. Not a noble, but might as well be. The De’Rourke family is one of the wealthiest in Ludfordshire and very much members of the social elite. As such, De’Rourke decided it would be advantageous to enroll his daughter in Marcellus’ school. It would of course be a great riposte for Aeron and Annabel to boast that their daughter is trained in Kharunian swordplay.

This brings us to Isobel De’Rourke. 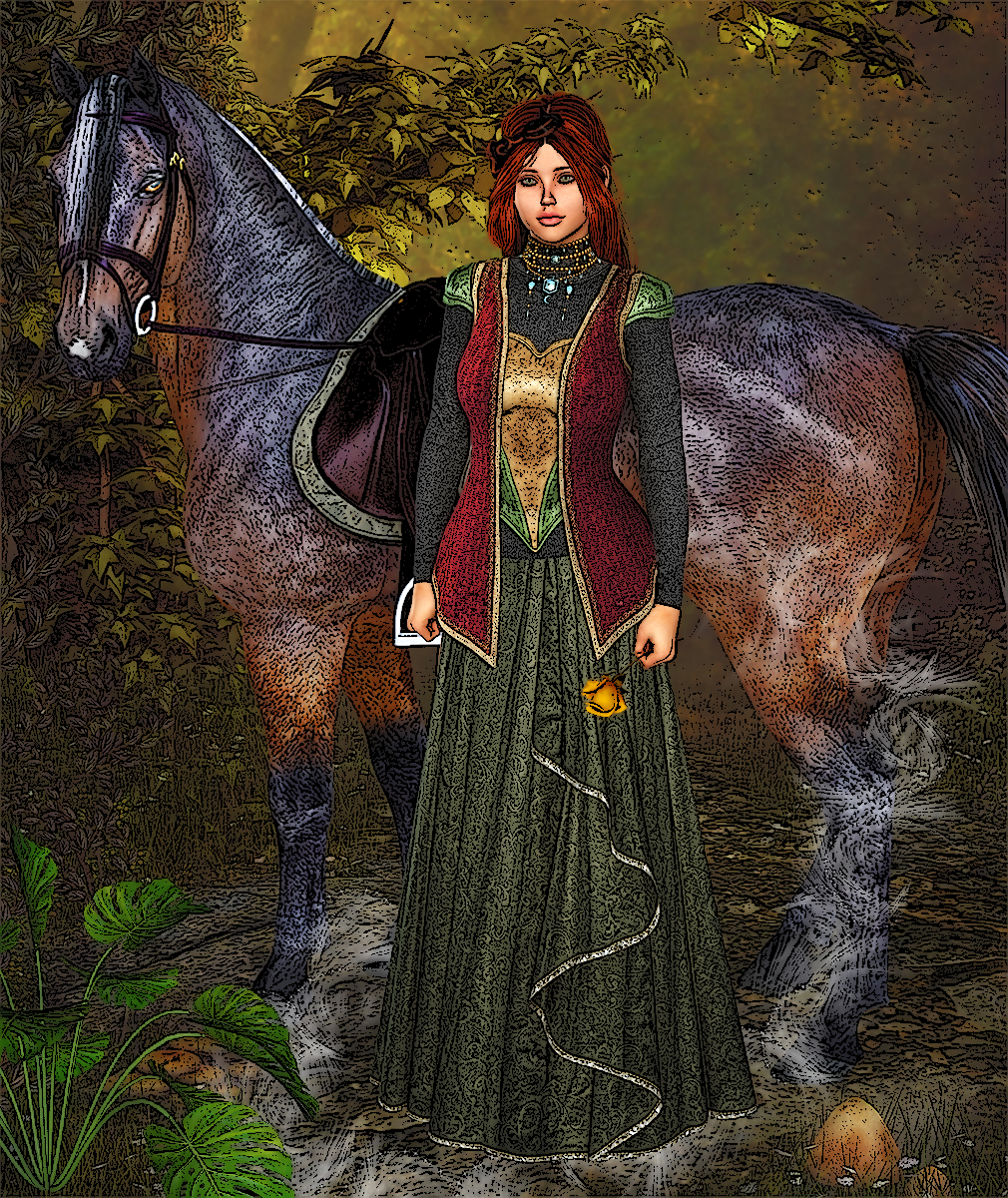 Now in his travels around Ardanya (and even in the court of Kharuna) Marcellus has known quite a few “nobles’ daughters” and political and social elite. He could count on zero fingers the number of them he actually liked or in any way could relate to.

Thus Isobel was quite a shock to him. Like many in Kembria, completely devoid of any prejudice or preconceived notions toward Kharunians. Enthusiastic, energetic, attentive, and while she exhibited the perfectionism that’s common among the high class of Kembria, she was genuinely interested in learning from Marcellus. While her parents saw the training as another step on the never ending ladder of the social elite, Isobel was happy and excited to be doing something that didn’t involve parties, social gatherings, pleasantries, fake smiles, and otherwise being a good host or putting a facade of friendship in a den of sharks. Marcellus of course cared little for social standing (ironic, really, since as a Tali’Centi and betrothed to a temple priestess he always enjoyed very high social standing in Kharuna).

And that is really where the story of these two starts. Isobel gradually learns she can drop the shell society has imposed on her and discovers she can be spontaneous and passionate and generally enjoy life on her own terms. And Marcellus, for the first time in a very long time, finds someone who isn’t demanding anything from him.

And I’ll leave it at that 🙂

(of course, about 2 years after arriving in Kembria part of Marc’s pre-Kembrian past catches up to him.. and I haven’t decided whether or not he gives that past the middle finger. It will depend on where he and Isobel sit I think.. I don’t know.. I haven’t written it yet lol). 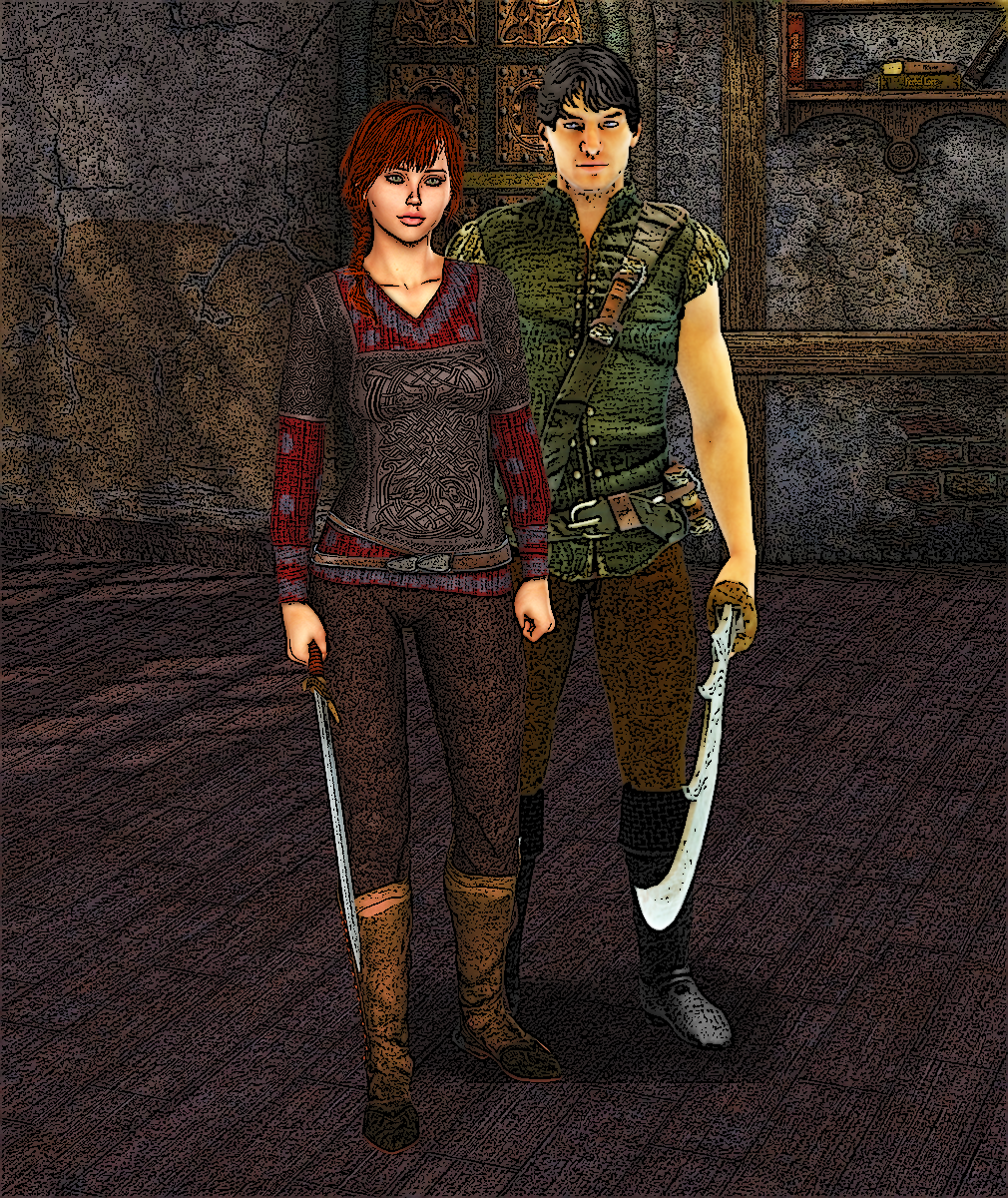 Marcellus and Isobel, once he convinces her that she cannot, in fact, wear a heavy styled dress while swordfighting.

I still need to touch these images up a bit. Isobel doesn’t look quite right, but pretty close. At least her eyes are the correct colour.

So I intended Isobel to be quite young, younger than Antheia.. but then I realized how young I actually wrote Antheia (she’s 24 when her and Marcellus meet). So I’m not sure about that. Marc is 38 at this point (after being in Kembria for 2 years). So I might just be ambiguous with character ages and just let readers infer.